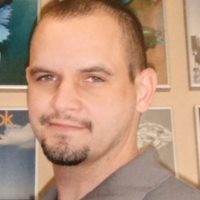 Wesman Todd Shaw, 46, of Kaufman, TX passed away on Sunday, August 9, 2020 in Kaufman. Todd was born in Dallas, Texas, on February 20, 1974, to W.T. and Patricia A. Shaw. He graduated from Kaufman High School in 1992 and went to Tyler Jr. College where he gained his Associates Degree. He later earned is HVAC license after attending Eastfield College. Todd worked as an HVAC repairman for DISD for 10 years as well as various contracted jobs. Todd was a voracious reader.  His love of books was well known by all that knew him. Todd was also an accomplished writer, writing many articles on music and guitars for HubPages.com.  He was a gifted musician and loved playing his guitars. He was a beloved son, brother and uncle.  To his great nieces and nephew, he was affectionately known as Uncle Batman Todd. His grandparents: A.T. and Mary Coker and Thomas and Lucille Shaw preceded him in death. Those left to cherish his memory are his parents W.T. and Patricia of Kaufman, TX, sister Denise Farmer and husband Mike of Kaufman, TX, brother Jonathan Shaw and fiancée Rachel of Tyler, TX, nieces: Ashton Marcellus and husband Todd and their children Halee, McKinlee and Emmalee, Tara Berry and husband Dustin and their children Cameron and Cheyenne, and Chelsea Ramirez and husband Joshua; numerous extended family and friends who will miss him dearly.

To order memorial trees or send flowers to the family in memory of Wesman Todd Shaw, please visit our flower store.