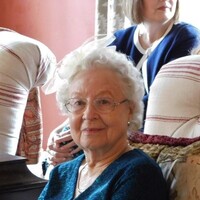 Wanda Ann Sanders died at a Waxahachie, TX, nursing home on September 24, 2021 aged 90. She was born in Kerens, TX, May 3, 1931, to Adren and Lula McSpadden Westbrook. She graduated from Blooming Grove High School in 1948 and graduated from the University of North Texas in 1952. On June 13, 1953, she married Richard Morgan Sanders, Sr., in Blooming Grove, TX.  In 1957, the couple moved to Kaufman where they raised their family of three children. Wanda began teaching language arts and social studies in Kaufman School District in 1967 and continued until her retirement after 29 years in 1996.  Wanda was a loyal member of the First United Methodist Church of Kaufman for 65 years. She served in many areas of the church. Richard and Wanda were among the founding members of the Pairs and Spares Sunday School Class, and she was a teacher of the class for many years. She sang in the choir and was an active member of the United Methodist Women.  Especially after her retirement, she was active in local organizations often holding offices in them. Among these are Clover Club and Delta Kappa Gamma. She also was active in the Friends of the Kaufman County Library and volunteered at the library delivering books to shut-ins.  She was preceded in death by her parents, husband, son Richard Morgan Sanders, Jr, grandson Travis Morgan Sanders, and sister Pattye Lou Highley. She is survived by her daughter, Kimberly Ann and husband Donny Scott of Blooming Grove, TX; son, Justin Marshall and wife Deirdre Sanders of Mobile, AL; daughter-in-law, Regina Sanders of Lawrence, KS; granddaughter, Rebecca Allison and husband Brent Carnagie; and three great grandchildren, Houstyn Monroe Carnagie, Myric Levi Carnagie, and Lane Morgan Carnagie all of Eudora, KS. She is also survived by her sister, Adrelyn "Babe" Crider of Breckinridge, TX, as well as by beloved nieces, nephews, and many Westbrook and McSpadden cousins.  In lieu of flowers, memorial donations may be made to First United Methodist Church of Kaufman, Blooming Grove United Methodist Church, or Friends of the Kaufman County Library.  A memorial service is planned for October 9, 2021, at the First United Methodist Church of Kaufman.

To order memorial trees or send flowers to the family in memory of Wanda Ann Sanders, please visit our flower store.