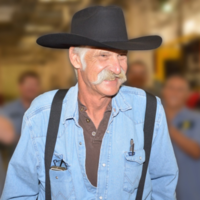 On Saturday, September 14, 2019, Walter Byron Johnson, loving husband, father and “Pop”, passed away at the age of 61. He was born to the late Walter Bishop Johnson and Mary Rose Gardner on September 29, 1957 in Dallas, Texas.  Byron was married to Cheryl Beth Morgan on June 30, 1978.  They were married 41 years. Byron graduated Skyline High School in 1976. He was a longtime member of Kaufman Church of Christ in Kaufman, Texas. In 2018, he retired from a 40 year career at Dallas Area Rapid Transit. He also enjoyed ranching, carpentry and welding work. Byron is survived by his wife, Cheryl Beth Johnson of Kaufman; his two children, Will Johnson of Kaufman, Jamie Stephen and her husband Ryan of Austin; his grandchildren James Preston Stephen and Lucy Byron Stephen; his sister Carolyn Fultz of Mesquite; his niece Sara Clark and her husband Aaron Clark; his nephew, Jonathan Fultz of Mesquite; his great nephews Tanner Clark and Everett Clark. He also leaves behind many caring friends. A funeral service will be held on Monday, September 16, 2019 at Kaufman Church of Christ at 2 o’clock in the afternoon. The family visitation will take place on Sunday evening, September 15th, at 6 o’clock in the evening at Parker Ashworth Funeral Home.

To order memorial trees or send flowers to the family in memory of Walter Byron Johnson, please visit our flower store.