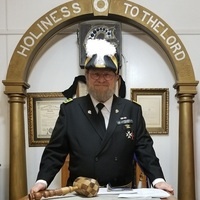 Thomas Martin Smith, 72, of Kaufman, affectionately known by all as “Smitty,” went to be with his Lord and Savior on Saturday, May 23, 2020. Smitty was born on August 24, 1947 in DeLeon, Texas. He grew up and attended school in several towns in and around this area of northwest Texas. He graduated from Sydney High School in 1965 and attended one year at Arlington College, before marrying the love of his life, Emlon Juanell Brandt on June 11, 1966. He worked for Southwestern Bell telephone for 6 months before being drafted. He served in the United States Army for 2 years during the Vietnam era in the Signal Corps at a base in the the Panama Canal Zone. Upon his honorable discharge in 1968, he returned to work with Southwestern Bell, and later AT&T when the companies split. After 31 years of service, he retired in 1997. Smitty was a lifelong, active and dedicated member of the Ancient and Accepted Order of Freemasons, Blue Lodge, Chapter & Council and Commandry. He was a Past Master, Past High Priest and Thrice Illustrious Past Master of local area Texas lodges. He was an endowed member of the Pentagon Lodge in Dallas, Bloomfield Lodge in Kaufman, the Artesia Lodge in Terrell, Chapter & Council and Commandry. In his free time, he enjoyed welding, woodworking and of course spending time with family and friends. Those who knew him would describe him as extremely outgoing and talkative, quick to laugh and generous and compassionate to a fault. He was forever bringing home stray animals to be lovingly nursed back to health. Smitty was preceded in death by his father, Thomas B. Smith of Nocona, his mother, Juanita L. Oliver of Arlington, his brother, Richard Smith of Arlington, his sister, Elizabeth Wilson of Arlington and his grandson, Maximus Smith of the Philippines. He is survived by his wife of nearly 54 years, Juanell “Nell” Smith, his daughter, Denise Smith and partner Donna Porter of Hillsboro, his son Bryan Smith and wife Joy Smith Plano, grandsons, Nicholas Smith of the Philippines and AJ Smith of Plano, granddaughter Heather Smith of Plano, mother-in-law, Juanita Barker of Newsome, step-mother, Nancy Smith of Decatur, as well as many other family members and friends. In lieu of flowers, Smitty preferred donations to the Scottish Rite Children’s Hospital. Please remember the family in your prayers and whenever you think of Smitty, you can honor his memory by helping someone in need as he would have done.

To order memorial trees or send flowers to the family in memory of Thomas Martin Smith, please visit our flower store.