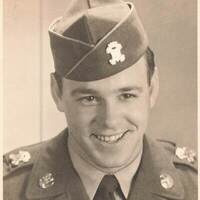 Tom (Buddy) Culver was born in Rosser,Texas May 15,1928 to Nathaniel and Ollie Waddle Culver. He grew up in Rosser,Texas and attended Rosser schools. He joined the US Army in 1950 and served during the Korean War until being honorable discharged in 1952.

He moved to Dallas in 1953 where he meet and married Mary Joyce Desmond on June 18,1954. They welcomed two children Carol Ann Culver and James Nathan Culver.

Tom worked for the City of Dallas Park and Recreation department from 1962 until retiring in 1983. He assisted in the design and maintenance of Thorntree Country Club in Desoto, Texas until 1985. He and wife Joyce moved back to Kaufman in 1994.

Tom was a member of First United Methodist Church Kaufman, and the Scurry Masonic Lodge for 66 years. He was a devoted Dallas Cowboy fan and rarely missed watching a game. He enjoyed making clothespin crosses that he gave away to many people across Kaufman County. He enjoyed many hours shelling pecans that friends Jeff Ford would pick up and Tonya Ford would deliver.

He loved spending time with his grandson’s deep frying turkeys and short fishing trips. Tom enjoyed and was so proud of his four great grandchildren.

Tom was laid to rest at Wilson Chapel Cemetery.

To order memorial trees or send flowers to the family in memory of Thomas Edward Culver, please visit our flower store.