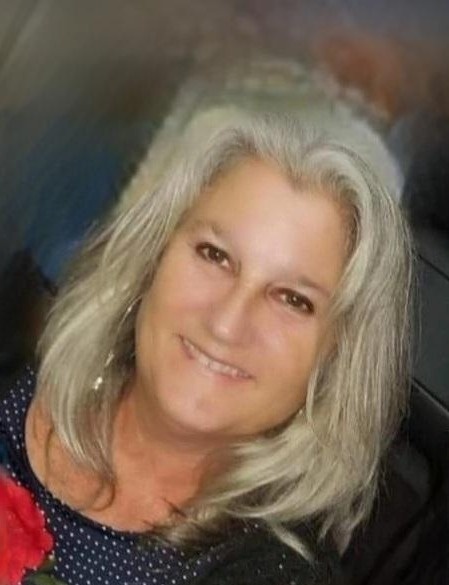 Susan Ottmo 59, of Scurry, Texas passed on Sunday April 24, 2022 at home with unconditional love and respect from family and friends. Susan was born in California but raised in Texas from the age of 9 by her parents Arthur B Cooper and Patricia Cooper.

Susan, her brother Larry Cooper and sister Connie Cooper enjoyed picking fruit from the many fruit trees on the property, buying penny candy and drinking soda. Susan and her family would go back to California in the summer to visit their grandparents where they learned to fish and water ski. However, Susan would have a really hard time pulling herself back up the ladder on the boat and everyone would laugh to hard to be much help.

When Susan wasn’t traveling to California, she was in the Scurry-Rosser Drill Team, going to the skating rink and Kaufman Movie Theater. When Susan was learning to drive she was not tall enough to see over the steering wheel and would drive looking through the steering wheel and played her radio really loud listening to rock music. When her daddy would get into the car, he would crank it and scare the mess out of him how loud the radio was. Connie said, Susan always played her music loud and would play the Eagles Hotel California album on repeat. Susan has always had a love of music, going to concerts, creating play lists on her phone and computer. When the radio wasn’t playing, she would hum and sing songs to herself.

Susan met her Husband, Aaron Ottmo when he kept saying, “pssssst, pssssst” behind her at the movie theater when she was 15 and he was 16, “if only I would have stayed looking forward,” she would say. Aaron and Susan were married June 23, 1979 and started a family with 3 children, Donna Ottmo, Kathryn Ottmo and Stephen Ottmo, Son N Laws: JR Rawdon, Keith Jacks and Daughter N Law Tammy Ottmo.

Susan had a couple of jobs in her lifetime but the most important job she would say was being a Wife, Mom and Nana. Aaron and Susan have 8 grandkids, Amity Rawdon, Lucas Rawdon, Edgar Rawdon, Stacy Rawdon, Dylan Rawdon, Erin Ottmo, Rylie Ottmo, Dixie Ottmo and 3 great grandkids SJ Rawdon, Slaiter Rawdon and Kai Rawdon. Susan enjoyed being out in the yard watering and planting her flowers, she called herself “a farmer” growing vegetables in the garden and her daddy would say “you mean a gardener” and she would say “no a farmer.”

Spoiling her grandkids, the neighbors kids, the nieces and nephews and their kids was very fulfilling to her and she tried her best to make all the birthday parties, making piñatas, homecoming mums, getting blisters from the hot glue gun, going to school functions, having lunch with the kids at school, taking the kids to the movie theater, zoo, aquarium, bowling, ice skating rink, splash pad, water parks and playing board games. The kids would always look at Nana during a movie to see if she was crying and sure enough she was and all the kids would laugh and say Nana is crying. Susan enjoyed watching Nascar and going to the Texas Motor Speedway with Aaron and Allen, however the weather was never in their favor and while camping in a tent in the parking lot, they would endure flash floods, tornados and snow, their tents would blow across the parking lot while hiding in the truck or they would wake up to snow. The stories of their adventures at Nascar are hilarious and Susan is the only person in the World that can take a nap in the stands during Nascar.

Susan would say “Something about whipping your head back and forth watching the cars go by would make me tired,” Aaron would say, “I would look and around and Susan would be asleep in her ten-thousand-dollar ticket seat and say what the hell are you doing, and she would laugh. Susan loved floating the river, camping and spending weeks at a time on a cruise ship soaking up the son, visiting various destinations and experiencing her first time to drive a four-wheeler in Roatan.

She was placed at the back of the line and she still managed to lose control from not being able to squeeze the hand brakes. Susan zipped lined the tree tops of the jungle, tubed and walked dark caves, scuba dived and swore the instructor held her under because she would just float right back to the top. Susan was always packed months in advance for trips and she was always ready to go, it didn't matter where we were going she was going. Her favorite trips were with the grandkids, and she loved getting to see them experience new adventures.

Susan enjoyed taking care of her family and everyone else's families as well. Susan was not just a wife, mom and nana to her family, Susan was everyone's mom, nana, friend and sister. Susan enjoyed giving to everyone, she would send flowers for all occasions, make chocolate covered strawberries for Valentine’s Day and she hated strawberries, she would make 75 to 100 loaves of banana nut bread to pass out at Christmas and she hated bananas. Susan made millions of cookies to give away for birthdays and Christmas, everyone looked forward to getting her banana nut bread and cookies and question why someone has more than them or where was theirs and do you have more. Susan was a great woman as Aaron would say and she will truly be missed by everyone, but as she would say:

Join us to share some of our favorite memories and stories, to

Celebrate a wonderful person who will be greatly missed.

Please bring a dish for lunch and lots of love.

To order memorial trees or send flowers to the family in memory of Susan Ottmo, please visit our flower store.

Please join us to share some of our favorite memories and stories, to Celebrate a wonderful person who will be greatly missed. Please bring a dish for lunch and lots of love.