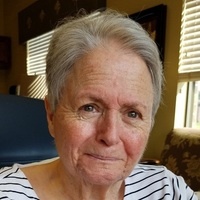 Shelby Faye Rohrbacker was born on April 9, 1943 in Athens, Texas to Lee and Lovie Neal Barnett. She passed away peacefully on September 28, 2021. Shelby married Gordon Rohrbacker on June 11, 1960, and they recently celebrated their 61st wedding anniversary. They lived most of their lives in Eustace where they raised their six children. Shelby was a long-term employee at Eustace ISD. After she retired in 2000, Gordon and Shelby moved to Scurry so that she could do the job she loved the most, being a fulltime grandmother and caregiver to her grandkids. Shelby was a devoted wife, mom, and grandmother to her family. She dearly loved her family and cherished her time with her twin sister, Sandy, with whom she shared a special bond. Shelby liked to travel, be outdoors, and cook for her family and friends. She had a competitive nature about her and, when she was young, enjoyed playing sports, especially softball. In her later years, she loved spending time with her grandkids, having them come for sleep-overs, and beating them at cards and board games. Shelby was a faithful Christian and actively served the Lord wherever she was. While living in Eustace, she was a longtime member of First Baptist Church where she loved singing in the choir. She showed her love for Christ by opening her home to anyone in need. She loved to have her children's friends spend time with her family and cared for them as her own. After moving to Scurry, she joined Mount Olive Baptist Church. There, she continued to serve the Lord as the AWANA food director where all the children in her church and community affectionately referred to her as Granny. Although her children and grandchildren knew she firmly believed in discipline, Shelby also had an out-going personality and fun-loving spirit. She had a contagious laugh that will never be forgotten, along with her boisterous singing and occasional yodeling. Shelby touched many lives and will be remembered fondly by all who knew her. Shelby was preceded in death by her parents, Lee and Lovie Barnett, sisters Bessie Penix and Bert Lugo, and son-in-law Jeff Horton. She is survived by her husband Gordon Rohrbacker, sons Gordon Rohrbacker, Jr. and wife Lisa, Henry Rohrbacker and wife Angie, daughters Carla Ashton and husband Bobby, Janet Bonner and husband Scot, Joanna Horton, Donna Ward and husband Rodney, countless grandchildren and great grandchildren, siblings and spouses Johnny and Bobby Barnett, Harold Barnett, Hazel Lane, Morris Barnett, Sandy and Carol Robbins, Jody and Bob Letchworth, and a whole host of extended family.

To order memorial trees or send flowers to the family in memory of Shelby Faye Rohrbacker, please visit our flower store.