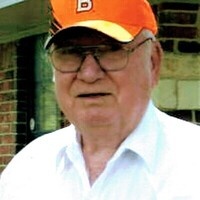 Robert Newton Stewart of Scurry, Texas went to be in the presence of Jesus on January 30th, 2022. Robert was born to Isaac Newton Stewart and Edna Elizabeth Whitely on October 15, 1932. He was raised in the community of Peeltown and attended Kemp High School.

Robert joined the U.S. Navy in 1951 where he served on a repair ship during the Korean War. When he returned home from the service, he married the love of his life, Mittie Jo Garrett, on October 28th, 1955. They were married 59 years until her death in December of 2014.

Robert was a founding member of the Scurry Volunteer Fire Department and served as the first mayor of Scurry from 2003-2009. He was also an active and faithful member of Mt. Olive Missionary Baptist Church in Scurry, where he also served as a deacon.

Visitation will be held at Parker-Ashworth Funeral Home in Kaufman, Texas on Sunday, February 6th from 6-8pm. Funeral services will be conducted at Mt. Olive Missionary Baptist Church in Scurry, Texas on Monday, February 7th at 2pm.

To order memorial trees or send flowers to the family in memory of Robert Newton Stewart, please visit our flower store.