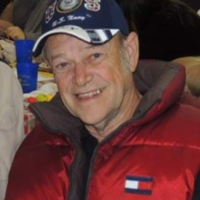 In this time of the coronavirus outbreak, tradition may fly out the door. Births and funerals may be a little different for now. RayDelll Smith was born August 12, 1946 at the family home in Wortham, TX to Odell and Mildred Shanks Smith. He was delivered by his beloved paternal Aunt Ollie. His was a large extended family in which many of his cousins were like siblings as well as lifelong friends. He was raised mainly in the Mexia area and in Limestone County and attended school there. He enlisted in the Seabee’s branch of the Navy and worked with diesels and heavy equipment and would serve in Vietnam. Upon his return to civilian life in Houston, TX he worked for the Coco-Cola Co. Later he worked for Amos Construction Co. as a diesel mechanic. While working for the Heath Utilities in Forney, TX he met his future wife Peggy Davis Smith. They married in 1971 and shared 49 adventurous years together. He then went to work for the Western Geophysical and was the shooter 1st class where he handled dynamite and powder storage for the crew, as well as setting the dynamite charges. Regional travel was part of this job. Next he went to work for Dresser Ind as a heat treater. His last employment was as an over-the-road driver for Orman Bros. Trucking. This was his favorite of all his jobs and he spent almost 15 years there. He received the Million Mile Award during this time. Ray battled cancer through 2008-2009, and was blessed with an additional 10 years of life. He passed into God’s eternity March 26, 2020 with his loving family and fur babies at his side. He spent the last 10 years of his time helping other with whatever needs they had and acting as the patriarch of his extended family. He rarely met a stranger, and he was always ready for a good joke or prank. He gave a helping hand to many a friend or stranger as well. He liked to work and almost always had a project going. The couple loved to travel, their family, their corvettes and Harley’s. Ray had a knack for fixing anything and everything, a trait that he passed on to his sons. He attended Mt. Olive Baptist Church in Scurry, retained membership at Northside Baptist Church in Mexia, TX. His parents preceded him in death along with his brother-in-law Billy Joe Whitener. Those left to cherish his memory are his loving wife, Peggy Smith, son Ray Smith and wife Linda of Scurry, Son Jamie Smith and wife Melanie of Forney, Son Randy Smith of Scurry, Grandchildren: Linsey Ferrell and husband Jared, Sierra Smith, Kaylee Smith, Kevin Mills, Lyndzey Smith, Micah Smith; sister Mildred Whitener (Sissy) of Mexia, TX; niece Carolyn Williams of Mt. Airy, NC, nephew Joseph Whitener and wife Kristie of Kinder, LA; numerous cousins, great nieces and nephews, extended family and friends who will miss him dearly.

To order memorial trees or send flowers to the family in memory of Ray Dell Smith, please visit our flower store.