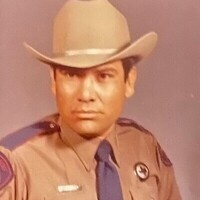 In loving memory of Raul Santos Morales
It is with great sadness and a heavy heart, that the family of Raul Santos Morales, of Kaufman, TX, announces his passing on August 29, 2020, at the age of 74. Raul was born to Raul and Maria Morales on January 15, 1946 in Laredo, TX. Raul’s father built a career in the U.S. Air Force, which allowed him the opportunity to travel the world during his childhood. As a teenager, his family settled in Topeka, KS, where Raul attended and graduated from Washburn Rural High School. It is there that he met his true love, his soul mate, his better half, Dala Osborn, whom he married on June 8, 1968. In 1975, Raul began his career in law enforcement, in Sherman, TX, where he was employed as a Sherman Police Officer. In 1979, he moved his family to Houston, TX where he continued his law enforcement career path as a Texas State Trooper. Shortly thereafter, Raul and his family were transferred to Kaufman, TX, in 1980, where they found their forever hometown. Following a kidney transplant in the fall of 1986, he continued his career path in the private corporate security sector. In 1989, he received his Bachelor of Science degree in Criminal Justice from Dallas Baptist University. Raul retired from Raytheon Technologies, Garland, TX, in 2008. Raul spent a life time serving the public, as he always had a passion for helping others. If you ever had a chance to meet Raul, you quickly learned he was a man of honor and was known for his kindness and compassionate spirit, but most of all, he loved and adored his family. In his later years, he was often found at various sporting events cheering for one of his grandkids; he was their #1 fan, Raul is preceded in death by his parents, Raul and Maria Morales; his sister, Anna Wolfe: his nephew, Alex Morales; and his niece, Melinda Key. Raul is survived by his loving wife of 52 years, Dala Morales; his children, Aimee Morales, Joel Morales, Angela Morales and Chelsea Rigenhagen: his grandchildren, Stephen Morales, Darius McGee, Hunter Morales, Amaiah Morales, Raiden Rigenhagen and Reeselyn Rigenhagen; siblings, Maria Wells, Ginger Lansdell and Rafael Morales; and numerous extended family members and friends. Raul has left a forever impact on so many lives and will be greatly missed. However, Raul would not want us to be sad; he would want us to cherish our own personal memories we each shared with him and remember that this goodbye is only temporary….we shall meet again. The family will host a Celebration of Life on Saturday, September 26, 2020, at Adair’s Saloon 2624 Commerce St, Dallas, TX, from noon to 4pm.

To order memorial trees or send flowers to the family in memory of Raul Santos Morales, please visit our flower store.