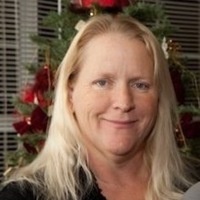 Patricia Joann Escamilla, 54, of Dallas, TX passed away on February 25, 2020 in Dallas. Patricia was born on March 27, 1965 to Priscilla McGee in Des Moines, IA. She moved to Dallas in 1976 when she was 11 years old. In 1977, she met Cecilio Najera Escamilla and they married in Kaufman, TX on February 14, 1979 and had a loving 41 years together. Patricia owned rental properties with her husband throughout their life. Patricia enjoyed coloring, arts and crafts projects and dancing. She loved spending time with her family, cooking for them and being with her grandchildren. She was the type of person who would take care of anybody in need; she helped raise several kids in her family and in the neighborhood and take care of adults who were in need. Patricia was preceded in death by her mother, brother Jerry Saner and grandchild Psalm Ezequiel Mitchell. Those left to cherish her memory are: husband Cecilio of Dallas, TX, daughters: Wendy Mitchell and husband Jerry of Kaufman, TX, Crystal Gutierrez and husband Noel of Rowlett, TX, Marisela Escamilla and fiancée David Waddleton of Dallas, TX, Elizabeth Escamilla of Dallas, TX; son Cecilio Escamilla III and wife Rathy of Dallas, TX; grandchildren: Patrick, Savannah, Samuel, Pearl, Victoria, Sophia, Deigo, Madison, Alexia, Leonardo, Mia, Athena, Khaos and Iris; numerous extended family and friends who will miss her dearly.

To order memorial trees or send flowers to the family in memory of Patricia Joann Escamilla, please visit our flower store.