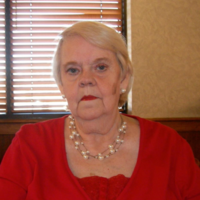 Merle Lee Dunn, 80, of Kaufman, TX passed away on December 31, 2019, in Kaufman. Merle was born on September 29, 1939, to George and Hattie Whitley in Quinlan, TX. Merle grew up in Quinlan but moved to Mesquite where she graduated from Mesquite High School. She was a girly girl who loved jewelry and having her nails painted. Merle married Virgil Ray Dunn on January 28, 1958, in Mesquite. Shortly after their marriage, they moved to Pleasant Grove where they raised their boys.  She spent many years serving as PTA President when her sons were attending Annie Webb Blanton Elementary School, and she was actively involved in Band Booster Club at  W. W. Samuel High School where Scott played in the Marching Band.  She worked many years for Blackburn Insurance Agency in Pleasant Grove where she was Office Manager. When she retired she relocated back to Mesquite to be close to family and adopted a Chihuahua that she dearly loved named "Taz". Merle raised two boys who became strong, self-sufficient and productive men. She was a great mom! Her parents, husband, brother Kenneth and sister Katie preceded her in death. Those left to cherish her memory are: sons Richard Dunn and wife Paula of Kaufman, TX and Scott Dunn of Mesquite, TX; brother John Whitley of Seagoville, TX; grandchildren: Brent Dunn and wife Jenny, Amanda Roberts and husband Dustin, Justin Dunn and wife Kristen, Samantha Dunn, Taylor Dunn, and wife Nicole, Bethany Dunn, step-grandson Jaryd Guerrero, and wife Renee; great-grandchildren: Kaitlyn Roberts, Landon Dunn, Caden Dunn, Caleb Roberts, Jaxon Dunn, Avery Dunn, Minnie Dunn, Ryan Dunn, and J.R. Guerrero; along with numerous extended family and friends who will miss her dearly.

To order memorial trees or send flowers to the family in memory of Merle Lee Dunn, please visit our flower store.