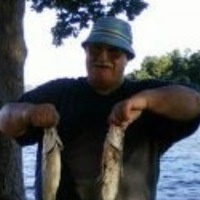 David Clintern Holleman, 73, of Kaufman, Texas passed away on August 26, 2021. David was born on October 4,1947 to Thomas and Maxine Holleman in Kerens, Texas. He grew up in Kerens and Dallas, Texas. Where he married Judy Holleman on April 9, 1966 in Dallas , Texas. He was a member of the Armed Forces where he served in Vietnam, 1967-1969. His chosen career was truckdriver/diesel mechanic. David retired from Stephens Transport in 1998. David enjoyed fishing with his Uncle Russel, loved hunting. Mostly in his later years he spent his time keeping up with his grandkids and great grandkids. He loved all his babies very much. He was preceded in death by his parents Thomas and Maxine Holleman, brother Tim Holleman and sister Connie Holleman. Those left to cherish his memory are his beloved wife Judy, daughters Rosa Logan and husband Chase, Jamie Matthews and husband Bart and Emily King and husband Jason. Grandchildren Kiri, Lance and wife Taylor, Cobe, Caden, Tabitha and husband Casey, Renee, David, Bailey and Breezy. Great Grandchildren Kyndal, Remington, Emmy, Caleb, Breanna and Charli. Brothers Michael Holleman, Lee Holleman and wife Teresa, and Doug Holleman and wife Cyndi. Numerous nieces, nephews, extended family and friends that will miss him dearly. The family asks in lieu of flowers that donations may be made in David's name to the College Mound Fire Dept. or Ceader Creek Animal Shelter.

To order memorial trees or send flowers to the family in memory of David Clintern Holleman, please visit our flower store.