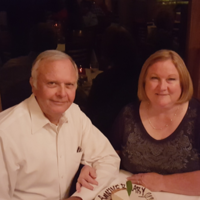 Lance Henry Holmes, 69, of Terrell, TX passed away on April 19, 2021 at home. Lance was born on November 11, 1951 to Henry and Virginia Holmes in Big Spring, TX. Lance graduated from Terrell High School in 1970. After graduation he enlisted into the United States Marine Corp. and was there from 1970-1973. On his return he attended Henderson County Community College in 1973-1974. On October 4, 1974, in Kaufman, Lance married the love of his life, Scherri Wiley. They have been married for 46 years and enjoyed their life and family together. Lance went back to school to earn his Bachelor's Degree in Electronics 1976. He worked for AT&T for 30 years before retiring in 2011. Lance's parents Henry and Virginia preceded him in death. Those left to cherish his memories are his wife Scherri, son Christopher J-Henry Holmes and wife Kira, daughter Shanna Renee Ford, grandchildren: Joel Keith Ford, Renee Dubose Ford and Logan Cooper Holmes; sisters: Nena Marie Langford and husband John; nieces and nephews: Michelle and Robert Manning and children: Irelynd, Chalmer and Oliver; Michael and Emely Wiley and children: Bryce and Jordyn; Nikki and Sam Marshal and children: Harper and Beau; Hearther and Cason Jones and son Henry; Kara and John Bailey; other extended family and friends who will miss him dearly.

To order memorial trees or send flowers to the family in memory of Lance Henry Holmes, please visit our flower store.