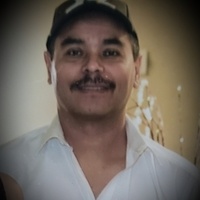 Juan Rangel, 51, of Terrell, TX passed away on October 12, 2019. Juan was born on July 27, 1968 to Jesus Rangel and Natalia Vega in Hacienda Espejo, Apaseo el Alto Guanajuato, Mexico. He moved to the United States when he was 15 years old and found a home in Terrell. Juan fell in love with Margie Atchley and they have been together for 31 years, since July 13, 1988. He has worked for Madix in Terrell for 26 years. In 2001, Juan became a citizen of the United States and was happy when it finally happened. He was a hard-working man taking pride in his work, but he was also a very proud family man. He loved his wife Margie and thier 3 kids. He took his son Tino to watch mexican wrestling every weekend. He was a man of few words, had simple day to day routine and loved going to buffets. He was a beloved Husband, Father, Grandfather and Brother. His parents, grandparents: Abuelitos de Mama, Maria Guadalupe Guerrero, Aurelio Vega and brother Constantino Rangel preceded him in death. Those left to cherish his memory are his wife; children: Amelia Rangel, Juana Rangel and Constantino Rangel; his grandchildren: Paisley McCool and Emery Rangel; siblings: Juana Rangel, Puebla Rangel, Demetrio Rangel, Isabel "Chabel" Rangel, Isidro (Apulina) Rangel, Amelia Rangel and Eva Rangel; numerous nieces, nephews, extended family and friends who will miss him dearly.

To order memorial trees or send flowers to the family in memory of Juan Rangel, please visit our flower store.