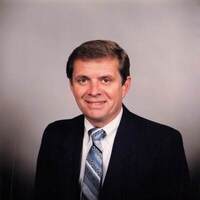 Johnny Countryman was born on August 30, 1943 in Kaufman, TX to JR and Ann Countryman. He died October 17, 2021 after fighting a long and courageous battle with Parkinson's Disease. He was surrounded by his adoring family. Johnny graduated Kaufman High School in 1963. He attended the University of North Texas for a time and quit to join the Navy. After boot camp in San Diego he was sent to language school. There he was trained in Mandarin Chinese in order to translate Chinese messages that were intercepted by the United States. He was stationed in Washington D.C. Upon completing a four-year stint with the Navy he finished his degree at the University of North Texas. he then took the rigorous exam and became a Certified Public Accountant. Soon after, he landed a job with the prestigious accounting firm Arthur Andersen and made a home with his wife and children in Dallas. Later he transferred to Midland where he lived until his return to Kaufman in 1987. He loved his hometown and soon opened his accounting office and got involved with the community. He spent countless hours with the American Legion working to build its presence in Kaufman. He was also greatly involved with the Kaufman Chamber of Commerce and started the first chamber auction. His soon to be wife, Candy, jokingly threatened to divorce him because he was spending so much time trying to organize and make the auction a success. Since they weren't married at the time, she didn't. The auction was an overwhelming success as was the marriage that came a little later. Johnny was very involved with the veteran activities and for many years organized Kaufman's Memorial Day program. It was his pet project and he poured his heart into trying to make it a great event each year to honor Kaufman County veterans who died in the line of duty. Several years he also organized services for Veteran's Day. He was the driving force in bringing a 4/5 size replica of the Vietnam Wall in Washington D.C. to its permanent resting place in Kaufman's Veterans Park in a year where he was serving as President of the Chamber of Commerce, Lions Club and Commander of the American Legion. He was also very involved with the Kaufman Lions Club serving as treasurer. Johnny and Candy married December 8, 1990 in Las Vegas. They immediately set about building a blended family. The four kids were such a blessing and later they were blessed with three grandsons. Johnny was preceded in death by his brother Joe, his niece Toni Miller and his parents Ann and J.R. Countryman. He is survived by his wife Candy, sons: Cory Countryman and Chris Pickens and wife Erica; daughters: Lisa David and husband Paul and Kirstin Pickens and partner Michelle Krenek; grandsons: Jonathan Countryman, Carson Pickens, Cutter Pickens, Truett Steakley and Justin David and wife Ashley; granddaughters: Emarie Steakley, Jody Reynolds and husband Jason; sister Barbara Jordan and many great grands, nieces and nephews. In lieu of flowers the family requests donations to the Parkinson's Foundation or Kaufman Vietnam Wall Memorial.

To order memorial trees or send flowers to the family in memory of Johnny Countryman, please visit our flower store.