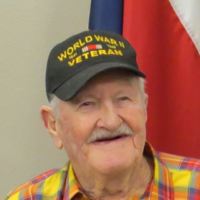 Joe Edmon Cox, 99, was called to his eternal resting place on November 19, 2020.  He was born on February 18, 1921 to John P. and Eula Mapp Cox in Kaufman, TX.  He lived his entire life in the Kaufman area, attending school in several rural locations.  In 1942, he answered his call to service, as our country entered World War II.  He joined the Army serving under the famous, General George S. Patton, in North Africa, Sicily, Italy, and France. He participated in 3 major beach invasions, the last at Anzio, Italy.  The allied commanders refused the plans for this invasion calling it a “suicide mission”.  They were ultimately overridden by Winston Churchhill, with this surprise invasion resulting in the capture of Rome.  At the time of his passing, Joe was the oldest WWII veteran in Kaufman County.  On February 2, 1946 he married Alice Bednar, enjoying 72 years together while raising three children.  Joe and Alice were faithful members of the Kaufman Church of Christ.  Joe was the owner/operator of Kaufman Mattress Factory, just off the square, which he started and ran from 1946 through 2001, employing the mattress making trade he learned as a boy in the cotton fields of East Texas, during the depression era 1930’s.  Joe also served his community as a school bus driver for many years.  Joe enjoyed raising cattle and following, first, his children then his grand and great grandchildren to every sport or activity they were involved in.  Joe was a socializer and loved solving “the world’s problems” at all the local coffee shops with his friends.  Joe was preceded in death by his wife and his parents; his brothers:  Emmitt Cox and Lonnie “Caggie” Cox;  his sisters:  Ethel Stanfield, Geneva George, Hazel Westbrook, Sally McClung, Dorothy Pirtle, and Mary Lou Land.  Those left to cherish his memory are his son Larry Joe Cox and wife Teresa of Kaufman, TX;  his daughters Sharon Vance and husband Johnny of Terrell, TX, and Sandra Hevener and husband Forrest “Buddy” of Kaufman, TX;  his grandchildren:  Casey Vance, Julie Vance, Maurie Melton and husband Jeremy, Megan Gamez and husband Santiago, Meredith Mickelson and husband Brad, Madalyn Dominguez and husband Will, Justin Meyers, Alicia Bingham and husband Michael, and Dustin Hevener and wife Shelby;  and great grandchildren:  Max, Charli jo,  Ava, Emma, Eleanor, Henry, and Rylie;  also numerous extended family and friends who will miss him dearly.  His funeral was held at Parker Ashworth Funeral Home on November 24, 2020, officiated by Minister Doug Page with internment at Morrow Chapel Cemetery in Ola, TX.

To order memorial trees or send flowers to the family in memory of Joe Edmon Cox, please visit our flower store.