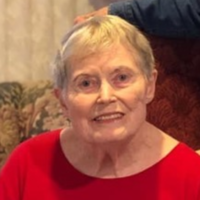 JoAnn Monk Robertson, 78, of Kaufman, TX passed away on January 11, 2020 in Carrollton. JoAnn was born on February 27, 1941 to Jesse Monk and Adelle Gross in Terrell, TX. She was raised in Abner and graduated from Kaufman High School. JoAnn married Billy Robertson on December 28, 1959 in Kaufman, TX; and they spent a loving 60 years together. She liked to cook and have her family by her side. She was a big supporter of her grandkids athletic teams never missing a game. She was a long time member of Southside Baptist Church. JoAnn was a beloved wife, mother and grandmother. Her parents, sisters: Barbara Bennett and Mary Lynn Smothermon; and brother Fred Monk preceded her in death. Those left to cherish her memory are husband Billy, son Steve Robertson and wife Lori of Kaufman, TX, grandchildren Morgan Robertson and Brooke Robertson; numerous extended family, church family and friends who will miss her dearly.

To order memorial trees or send flowers to the family in memory of JoAnn Robertson, please visit our flower store.