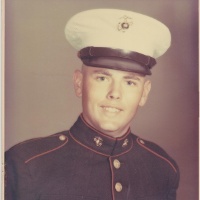 James David Collett, 71, of Scurry, TX passed away on August 12, 2019. James was born to James and Lucille Collett on September 10, 1947 in Shelbyville, KY. While living in Kentucky he married Gail Hays in Louisville in 1968. James was a member of the U. S. Marines serving from June 17, 1965 to April 10, 1969.  He had two tours in Vietnam and received two Purple Hearts. He moved to Lively in 1978 and worked for the Dallas Police Department for 22 years retiring in 1996. James was a member of the Purple Heart Riders of East Texas, Patriot Guard, American Legion and a certified Peer Specialist of Texas. He was also a member of the New Beginnings Baptist Church of Kemp, TX. His parents and son Phillip preceded him in death. Those left to cherish his memory are: wife Gail, daughter Jennifer Mahon; grandchildren: Jackson, Reagan and Dylan Mahon; and brother Tony Collett who will miss him dearly.

To order memorial trees or send flowers to the family in memory of James David Collett, please visit our flower store.