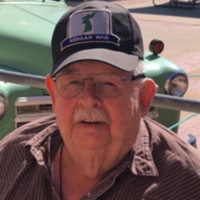 James Thomas “Bud” Clayton of Rosser, Texas, went to be with his Lord and Savior Jesus Christ on Tuesday, February 4, 2020. He was surrounded by his family as he peacefully left this world. Bud was born on April 2, 1933 in Rosser to Bishop M. Clayton and Molly Jewell (Fletcher) Clayton.

Bud graduated from Scurry-Rosser High School in 1957.  He was a veteran of the Korean War where he served from 1953 to 1955. He was a member of First Baptist Church of Rosser where he served as song leader. He loved hunting and listening to bluegrass music. He enjoyed singing and playing guitar. Most of all, he loved to laugh and make others laugh along with him.

Bud worked as a truck freight dock worker at Red Ball Freight, Transcon Truck Lines, and Yellow Freight for a combined 26 years. After retiring in 1994, he performed farm work for the Burt family for many years.

Bud was known for his outgoing personality and sense of humor. He brought smiles to everyone who knew him. Bud never met a stranger. He spent many mornings meeting with the “Sloan’s Liars’ Club” and eating at The North Forty restaurant in Scurry, Texas. The hours he met with friends were spent joking around and “solving the world’s problems.”

For the past two years, Bud lived with his daughter and son-in-law in West, Texas. He enjoyed going out to eat, especially at Raising Cane’s, McAllister’s, and Whataburger. His favorite place was Tres Hermanos in Whitney, where he and his family often ate after church on Sundays.

Special thanks to Vaughan Baptist Church of Hillsboro and Emmanuel Baptist Church of Waco for support over the years. Appreciation is extended to Connally ISD and Blooming Grove ISD for their help when family members needed time off to care for Bud. The family thanks the following people and organizations for their help in caring for Bud: The staff of Hillcrest Senior Health Center including Dr. Benjamin Perry, Kandy Bullajian, all nurses, social workers, and patient service representatives; Texas Home Health Group; Baylor Scott & White Hospice; and Visiting Angels, especially Rosa Rodriguez and Tara Mallory. All caregivers were blessings from God.

In lieu of flowers, the family asks that memorials be given to First Baptist Church of Rosser or the Lewy-Body Dementia Foundation.

To order memorial trees or send flowers to the family in memory of James Thomas Clayton, please visit our flower store.