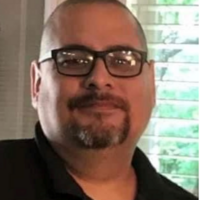 James Ryan Bearbow passed away on December 14, 2021 at the young age of 40.  He was born on November 18, 1981 in Lawton, Oklahoma to his parents James F. Bearbow and Lorraine Garza Peek.  He is preceded in death by his paternal grandparents Paul and Rita Gaddy and his maternal grandparents Rodolfo Garza and Maria Garza von Trotha.  He graduated from Elgin High School, Elgin, Oklahoma,  where he was in enlisted in the United States Army on October 18, 2011 and was honorably discharged on May 25, 2013.  After his service in the Army he attended Spartan College of Aeronautics and Technology in Tulsa, Oklahoma where he studied Avionics.  After graduation from Spartan, he obtained employment with Aero Dynamics where he worked as an avionics technician.

James was a fun loving, caring, and thoughtful person who loved movies, stand-up comedy and many different genres of music.  He was a “card carrying member” of the Kiowa Nation and proud to point this out whether for clarification or in jest. He never met a stranger, even as a young child, he loved talking to people and was quick witted.  If he teased you, you were in his circle and there you stayed.  Always good for interesting conversations about any subject, laughs, sometimes at his own expense or when just stating the obvious. He could always put a smile on your face and in your heart.

James is survived by his father, James F. Bearbow and wife Millie of Lawton, OK, his mother Lorraine Garza Peek and husband Christopher Peek of Kaufman, TX, his Great-Grandfather Buel Peek, of Independence MI, his Grandfather Edgar von Trotha of Denton, TX, his Grandmother Mary Jane Garza of Sacramento, CA, his Grandmother Debbie English, of Kaufman, TX, his Grandmother Janice Peek of Terrell, TX,  his brothers Brinden Peek and wife Airo of San Antonio, TX, Mason and Kasey Bearbow, his sisters Cloie Peek, and Sally Chalepah as well as his many aunts and uncles, Cheryl & Dave Dezell of Lawton, OK, Steven Bearbow Quoetone, Karl Bearbow, Kathleen Bearbow-Toppah and her husband Jerry Don of Anadarko, OK, Diane and Randy Brewer of Elgin, OK, Trey and Nicole von Trotha of Snohomish, WA, Eric and Tracy von Trotha of Gig Harbor, WA, Ashley and Brian Lewis of Kaufman, John English of Kaufman and numerous other great Aunts and Uncles and cousins.  The family requests that in lieu of flowers, a donation be made to the St. Judes Children’s Research charities.

To order memorial trees or send flowers to the family in memory of James Ryan Bearbow, please visit our flower store.