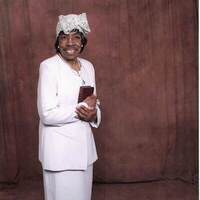 Irma Dell Phillips “affectionately” know as  pudding was born February 27, 1934, in Tchula, Mississippi, the second child to the late Elbert and Lizzie McGee Young. Irma departed this life on  February 4, 2022 at The Manor at Seagoville in Seagoville, Texas.

Irma married the late John Wesley Phillips in 1954, then shortly after moved to  Chicago where she worked as a baker for Davidson Bakery until the close of business. Irma worked for the Chicago Public School  System which she then retired from in the early 1990’s. Irma excepted Christ at an early age and became a member at Evangelic Missionary Baptist church under the leadership of pastor Fred Weathers. She had a strong passion for baking which everyone loved, she also enjoyed bike riding and tennis. In 1992 Irma moved to Memphis, TN,  where she would call home. Irma joined Mt Carmel COGIC, under the leadership of the late Administrative Assistant Charles Patton and Pastor Wille Vann. She was a faithful member of the church and served on the motherboard.

To order memorial trees or send flowers to the family in memory of Irma Dell Phillips, please visit our flower store.