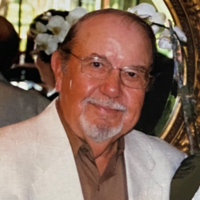 Herman was born in Kemp, Texas, on December 21, 1930, to Bessie Shaw and Henry Tharp, both of whom preceded him in death.  He was the eldest of three children.  Brother Jerry Tharp and sister Virginia Tharp Williams preceded him in death.  On November 17, 2020, Herman passed away peacefully, ending a well-lived life of 89 years.

Herman married Geneva Evans on July 10, 1953, and they had recently celebrated their 67th wedding anniversary.  Together, they raised a family of four children.  He was preceded in death by his wife Geneva J. Tharp his daughter Glenda Tharp and his son Jerry Tharp.

A graduate of Kemp High School and a United States Marine Corps veteran of the Korean War, Herman retired as a Captain from the Dallas Fire Department after 26 years of dedicated service.  For many years thereafter he worked as an independent painting contractor.  During his retirement from contracting he and Geneva enjoyed traveling to different states in order to visit friends and take in horse racing events. But more than anything, Herman took pleasure in holding large home-gatherings for family and friends where sporting events, sumptuous meals and good-natured activities and banter were the order of the day.

An accomplished fruit tree and vegetable home-gardener of fifty years, Herman took quiet pride in his picturesque gardens and their bountiful harvests which he shared with family and friends season after season.  He also enjoyed time on the lake with a fishing rod in hand and the family fish-fries that often followed.  A life-long fan of the Dallas Cowboys and the Texas Rangers, he rarely missed a game or an opportunity to critique the play of the teams, even days after a game had ended.

Herman was a man with a wide group of friends who enjoyed spending time with him.  And as a father, grandfather and great-grandfather he was the rock upon whom all of the children could depend to see them through the trials of life.  Now he is once again at the side of Geneva, as the two of them travel unseen alongside their family and friends who will always treasure their generous spirit and sorely miss their lively presence.

A family graveside service will be held on November 19, 2020, at his final resting place in Wilson Chapel Cemetery.  A Celebration of Life memorial service will be arranged and announced at a future date.

To order memorial trees or send flowers to the family in memory of Herman D. Tharp, please visit our flower store.