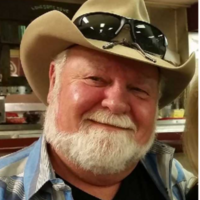 Harold Allen "Hanky" Handke was born in Tuttle, Oklahoma on October 7, 1946 and entered his eternal rest on December 7, 2021 in Kaufman, Texas.

He was welcomed to his heavenly home by his parents Frank and Ortha Handke, sister Teresa Handke, late wife Paula Handke, along with his grandparents, aunts, uncles, cousins, in-laws and many friends that he deemed family.

Those remaining to carry on his legacy are his wife Wanda Lewis, daughter Megan Handke and her husband Matthew, stepson Greg Lewis and his wife Angel, grandson Dakota Lewis and his wife Katie, granddaughter Savanah Ketchum and her wife Lacey, granddaughters Alesia and Alex Davis, aunts Neoma McKinney and Arlene Wilkins, bonus daughters Crystal Rees and Jenna Teeter, and his great grandbabies, lights of his life, Ryleigh Anne Lewis, Jaxson Don Lewis and Patrick Kennedy. He is also survived by a host of other family members and friends, all of whom held a very, very special place in his heart.

Harold grew up surrounded by his loved ones and although they moved many times as an Air Force family, Tuttle was always home. He graduated from Amarillo High School in 1965, worked as a mechanic for Ford, and was drafted into service in 1968. He proudly served in Vietnam for two years. It was during this time that he met Paula, and once home from service, they married in May 1970. Together they had one child, their daughter, Megan. Harold's career was at AT&T's manufacturing plant, where he was employed for over thirty years.

Harold's wife, Paula, passed away in 2004, and he was fortunate to find love again a few years later with Wanda Lewis, who was his former co-worker at AT&T and long time friend. Together they transitioned into retirement and enjoyed being great grandparents full-time.

Now let's really get into who Harold was and spark memories to make you smile.

He could make anything. His woodworking was top-notch, he made hand-turned pens, he could make any bottle into a lamp and got volunteered for props for all of Megan's activities. He could fix anything from a vehicle to a broken heart, was always calm and level-headed and was blessed with a quiet strength that drew people in. He talked like Donald Duck. All the kids who ever knew him were delighted to hear him do it and always requested it the moment they saw him. He loved guns, hot rods, pocket watches, country music, animals, fishing, playing guitar and being in the country with Wanda.

Harold was a devoted husband who cared for Paula every moment of her illness right up to her last minute and later doing anything and everything he could to show his love to Wanda. He was a man among men and those he chose to live life with held the highest rank in his heart.

He was the most involved, supportive and present dad, making countless props, doing science fair projects, teaching Megan to draw, bake, drive, fish, play guitar and much, much more, including always having a dad joke ready.

He was the perfect friend. Loyal, trustworthy, never too busy to lend a hand or an ear, and always up for a bit of good-natured mischief. His friends were his family and we wish we could list each one by name here.

Being Papa was his favorite thing in this world. He never stopped talking about those great grandbabies and loved taking them for rides on the "dump truck", going to the pond, and playing whatever they wanted with them.

Although we have had to say goodbye for now, each of us have been imprinted by his love, will keep his memory alive, have a Hanky story for every occasion, and celebrate his beautiful life that he was so grateful for.

To order memorial trees or send flowers to the family in memory of Harold "Hanky" Allen Handke, please visit our flower store.