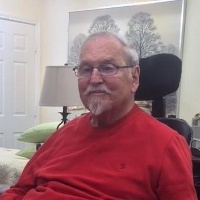 Gordon Roberts, aka "Bobby Ryman", entered heaven on July 12, 2019. He was raised in Sipesville, PA. After graduating from Somerset Area High School in 1962, he joined the United States Air Force where he served four years. His service career ended in Chicago, IL where he then entered the field of sales and left his mark with GE, Hoover, RCA and JC Penney. Gordon had an artistic gift in making pottery and enjoyed creating his own style of one-of-a-kind pieces. The joy of pottery making was abruptly ended when in 2009 he was diagnosed with Guillian-Barre Syndrome which paralyzed him from the neck down. He fought valiantly through physical therapy to walk again; however, over the years a number of medical challenges prevented him from reaching his goal. This was disappointing but it did not keep him from enjoying life despite his limitations. Gordon is survived by his wife Linda Haar Roberts; sister Barbara Wiltrout, of Scottdale, PA; son Gregory Michael Roberts and wife Katie; 3 granddaughters: Olivia, Sara and Sophia and many cousins. For those that knew Gordon's humor, you can just hear him say "I'm HERE" as he entered heaven. The family would like to thank the following for their care, love and devotion: Dr. Heather Adair, UTSW, The First Baptist Church of Kaufman, The Agape Sunday School Class, The Handy Helpers and especially the care givers that attended to and spoiled Gordon over the last ten years. In lieu of flowers please send donations to Handy Helpers at First Baptist Church of Kaufman. Services were held on Wednesday, July 17, 2019 with interment at DFW National Cemetery at 11:00am and a memorial service at Parker-Ashworth Funeral Home at 2:00pm.

To order memorial trees or send flowers to the family in memory of Gordon Albert Roberts, Jr., please visit our flower store.