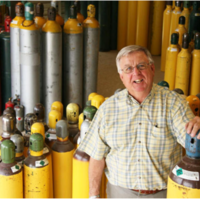 Glenn “Benson” Mitchell, aged 75, and a “Great American” passed on to his reward in the morning hours of November 2, 2019.

Benson was born in Kaufman, Texas on July 16, 1944 to Glenn and Lorene Mitchell.  He graduated from Kaufman High School in 1962, and was proud to tell anyone who would listen how a sports magazine once referred to him as a “shifty footed” halfback for the football team.  He later earned a degree from East Texas State, and spent the latter years of his life refusing to acknowledge his alma mater’s name change to “Texas A&M - Commerce.”  His hobbies included: hunting, golf, ranching and, arguing with his long-time friend Johnny Murrey over whether someone “had to be sick” or if they could “just die.”

In 1968 he founded Mitchell Welding Supply.  Under his leadership, Benson’s company expanded over the following decades due to his reputation for fair and honest dealings with his customers and competitors.

Benson had the unique fortune to be loved by three great women. On December 31, 1964 he was married to Linda Sue Mitchell.  Together they had three children: Julie, Jill and Chris; who he was left to care for after Linda Sue’s death in 1983.  In August of 1984 Benson married Kathy Mitchell, and welcomed her children: Rodney, Julie Beth and Jane into his family.  After Kathy’s passing in 2006, Benson was married to Sherry Mitchell on July 10, 2009, and added her daughters Shelly and Shayla to his list of children.  He loved all of his children deeply, and once told a friend he was determined that there would be “no hyphens or ‘step’ anything in this house - they are just my kids.”

Benson had a fierce pride in his hometown and constantly sought to give back in any way he could.  He served on the Kaufman City Council and was a Trustee for the Kaufman I.S.D..  He was also a deacon in the Kaufman Church of Christ where he took on his Lord in baptism at an early age and was a faithful congregate until his recent illness.  Benson’s faith allowed him to live (and sometimes quote to others) the “Greatest Commandment.” “Love the Lord your God with all your heart and with all your soul and with all your mind. This is the first and greatest commandment. And the second is like it: ‘Love your neighbor as yourself.’” His faith in his Lord and his love and generosity towards his neighbors were a great example to all who knew him.  He leaves behind a legacy of quiet assistance and counsel for those in need, and a loud and open hospitality for anyone who would come under his roof.  This includes hosting an annual dove hunt at his farm for many years, despite the fact that his guests repeatedly shot him.

The family wishes to extend their heartfelt gratitude to those who have helped care for Benson during his long illness.

To order memorial trees or send flowers to the family in memory of Glenn Benson Mitchell, please visit our flower store.