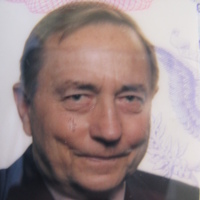 Gerald Wallace, 93, of Hamilton, VA passed away on November 12, 2019 in Virginia. Gerald was born on November 2, 1926 to Jesse and Lottie Wallace in Dallas, TX. He grew up in Kaufman and went to school and graduated from Kaufman ISD. He worked in the pharmaceutical business first with Pttman Moore pharmaceuticals which became Dow Chemical and retired with Beecham Labs. Gerald spent his time fishing, hunting and playing golf. He was a beloved husband, father and grandfather. His parents; his wives: Kathleen Wallace and Jeannie Wallace; brothers Carrol Wallace and Larry Wallace. Those left to cherish his memory are: sons Kent Wallace from Hamilton, VA and Scott Wallace from Dallas, TX; grandchildren: Christine, Natalie, Andrea and Lianne; great grandchild Isabelle; numerous extended family and friends who will miss him dearly.

To order memorial trees or send flowers to the family in memory of Gerald Wallace, please visit our flower store.