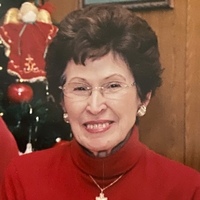 Geneva was born in Nashville, Arkansas, on February 7, 1935, to Edith Tarno and Berlin Evans, who both preceded her in death.  She was the eldest of eight children and is survived by four brothers, Ray, Edmond, Charles and William Annis and three sisters, Margaret Junkert, Jean Braswell and Monica Howell.  Geneva passed away on Sunday, August 9, 2020, after a lengthy illness.

Geneva was married to Herman Tharp on July 10, 1953, and they had recently celebrated their 67th wedding anniversary.  Together, they raised a family of four children.

She was preceded in death by daughter Glenda Tharp and son Jerry Tharp.

Geneva, or Nene as she was affectionately known to her grandchildren, was an avid gardener who delighted at being outdoors.  And as her many friends and acquaintances who knew her as Neva will recall, her gardens were always full of beautiful flowers and fragrant plants. She also enjoyed decades of vegetable gardening with Herman, or Papa as he was called by the grandchildren.  She canned many of the vegetables from their garden, so there were always delicious and wholesome treats in her kitchen and on the grill.  She was a wonderful cook and took great pleasure in preparing everyone’s favorite dishes for family gatherings.

In her later years, Geneva worked as a volunteer with the Visiting Nurse Association (VNA) in Kaufman, Texas.  She felt great compassion and concern for the terminally ill.  After many years in a volunteer role, she accepted a position as the VNA hospice volunteer coordinator, a period in which she created and implemented training programs that are still utilized today.  She possessed a true servant’s heart and was exceptionally dedicated to the program.  Her tremendous respect and admiration for all healthcare workers and their dedication to serving others, coupled with her experiences working with the VNA earned her the nickname “Nurse Neva” within her family.

Along the course of her long life, Geneva developed a love for quilting and excelled at the craft.  Each Christmas someone in the family was gifted with one of her handmade quilts, and they were always eager to learn who the lucky recipient would be.  She even made one very special quilt that was entered in competition at the State Fair of Texas.  Each one of her quilts is a treasured work of art and will now be even more greatly cherished.

A selfless, strong and especially capable woman, Geneva will be greatly missed by everyone who knew and loved her.  But she would not want for a long period of mourning; rather she would expect each of us to move on and make the very most of our lives, just as she did.  She will always be with us, for in our hearts and minds her memory will forever reside.

A family graveside service was held on August 11, 2020, at her final resting place in Wilson Chapel Cemetery.  A Celebration of Life memorial service will be held at a future date when family members are able to travel to Texas.

To order memorial trees or send flowers to the family in memory of Geneva Jewel Tharp, please visit our flower store.