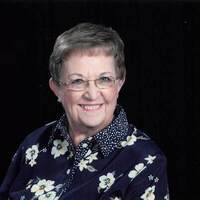 Frankie Lou Bethea Morgan was born on January 4, 1925 to Melvin Sheely and Lora Murel (Lipsey) Bethea. She was 95 years old. She lived most of her life in Terrell, TX and Quitman, TX.

She graduated from Terrell High School in 1943 where she studied voice with Mrs. Belle Boutwell and was soloist in church and many Terrell events in her youth. She married John Franklin Hinton of Terrell, TX on Oct. 21, 1945, and after his death in 1976 later married William Virgil "Jake" Morgan of Quitman, TX on Jan. 4, l980.

During World War II she worked at the Terrell RAF airport and as a nurse at Friddell Hospital. Later she worked on the substance abuse ward at the Terrell State Hospital for ten years before her retirement in 1990. Otherwise she was a homemaker who was devoted to her family---an excellent cook and seamstress, having sewn her daughters' clothes for most of their youth.  Admired by many for her green thumb, she took great pride in her plants and lawn.  Among her family, she was known as the “plant hospital” where they would bring her their sick house plants, and she would revive them until they looked like they had come from the florist.

She accepted Jesus Christ as her Savior and was baptized at the age of 13 in the same service that her father and her first husband were baptized. She loved babies, kept them in her home, and as a member of First Baptist Church, Terrell, served in the Cradle Roll Department for many years.

Frankie was preceded in death by her parents and her two husbands. She is survived by her three children and their spouses, Kathy and Bill Brown of Bolivar, MO, Karen and Michael Bedford of Terrell, TX, and John Franklin and Gabriella Hinton, Jr. of Dallas, TX; her grandchildren and spouses, Jeremy and Mallouce Brown, Jason Brown, Amy and Dustin Cross, Brandon and Kami Bedford, Sarah Hinton, and Mary Hinton; and her great-grandchildren, Christopher and Alex Brown, Colton and Luc Cross, and Scarlett Bedford; and a daughter-in-law Sandra Hinton.

She is also survived by her step-children and their families whom she loved like her own: Bill and Tracy Morgan and children Jimmy and Kristine Wheeler, Ronnie Morgan, Leah Morgan, and Whitney Morgan; Kathy and Tony Gilbreath and children Heather Gilbreath, and Jessica and Matt Ingram; Candy Folley and children Amber Folley, Wendy Folley, and Troy and Stephanie Folley; Randy and MariAnn Morgan and children Miranda Cook and Jennifer McFarland; and grandchildren Teri and Kyle Bedford. She also had 14 step-great-grandchildren. Graveside service for Frankie will be held at Oakland Memorial Cemetery in Terrell, Texas Monday April 20, 2020 at 2:00PM. In lieu of flowers the family is asking for donations to made to either the First Baptist Church of Terrell, or Samaritanspurse.org/donate. Services were under the direction of Parker-Ashworth Funeral Home in Kaufman, Texas.

To order memorial trees or send flowers to the family in memory of Frankie Lou Morgan, please visit our flower store.