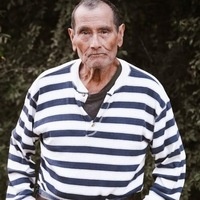 Felix was born in Lerdo de Tejada, Veracruz on August 20, 1936 to Jose and Victoria Palacios. Shortly after his birth, his mother tragically passed away. His father remarried and was raised by him and his step-mother for a short time. As an early teen, Felix was given the opportunity to leave Mexico and move to Gossett Farm near Kemp, TX. Nicholas and Amelia Torres welcomed him into their family making him the oldest of 8 children. At the age 30, the family left Gossett Farm and moved to Kaufman where Felix lived ever since. Felix began his career at Tamsco and worked until the company closed. After that, he started his 2nd career at Air System Components in Terrell, TX . He worked there for many years and finally retired in 2003 at 67 years old.

Felix loved the outdoors and loved to mow. His favorite time was spending weekends at the ranch where he would farm and grow fresh vegetables. He loved to cook out on the grill too, making the best fajitas and tablitas in the world. Felix loved his family and friends so much. He was the most loyal, kind and giving person to everyone. He never met a stranger.

Felix’s memorial will be held at St. Ann’s Catholic Church in Kaufman, TX at 10 am on Friday, April 23, 2021. His burial will follow at Kemp Cemetery.

To order memorial trees or send flowers to the family in memory of Felix V. Palacios, please visit our flower store.