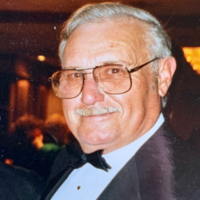 Eugene Alferd Wilkerson, 84, was born on August 6, 1938 in Dallas, TX to mother Ira (Dixie) Wilkerson and Father Lewis A. Wilkerson.  He passed on February 2, 2022 at the age of 83.  He is survived by his sister Margie Findley of Kaufman, TX, nieces Barbara Murdock, of Kaufman, TX and Margie Smith of Augusta, GA , brother-in-law Kent Gilley of Argyle, TX, and nephew Johnny Murdock of Kaufman, TX.  His nickname “Junker” has been his calling card and legacy.  He served 30 years on Dallas Police Force, Dallas Constable and Court Bailiff before retirement.  He was a member of Metropolitan Lodge #1182, A Hella Temple Shriner and a member of the Royal Order of Jesters Court #25 Dallas, TX.  Junkers bucking car was a mainstay in the Dallas State Fair Parade for over 35 years and he over saw the state fair parade tent area for over 45 years.  His service and keen wit and smile touched untold numbers in those many years.  He was with us, and he will be missed but not forgotten.  There are some who bring a light to the world that even after they have gone the light remains.  Rest in Peace Brother.

To order memorial trees or send flowers to the family in memory of Eugene Alferd Wilkerson, please visit our flower store.