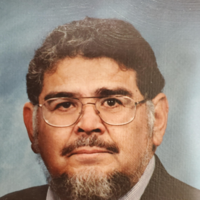 Domingo Arturo Leyva, 73, of Scurry, TX went to be with the Lord on October 17, 2019 in Dallas, TX. Domingo was born on October 21, 1945 to Eduardo and Sirilda  Leyva in Hondo, TX. He was raised and went to school in Hondo before joining the Navy. Domingo married Doris A. Leyva on July 24, 1976 and they spent a wonderful 43 years together. He worked for Sherwin-Williams for 29 years before he retired in 2003. He served as Mayor of Scurry, involved in the Scurry Rosser Sports Association, served his church in a visitation ministry and helped at the Daniel Springs church camp. He was a member of the New Harvest Baptist church and enjoyed barbecuing and doing yard work. His most precious time was spent with his family; he was a beloved husband, father and grandfather. His parents and sister Tomasa Leyva preceded him in death. Those left to cherish his memory are his wife Doris, children: Bart Mundie and wife Vickie, Jason Cryer and Jonathan Leyva and wife Amanda; sister Stella Leyva; grandchildren: Amber McCollister and husband Jake, Lane Cryer, Jacob Cryer and Gabrielle Leyva; numerous extended family and friends who will miss him dearly.

To order memorial trees or send flowers to the family in memory of Domingo Arturo Leyva, please visit our flower store.