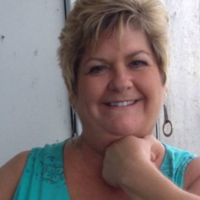 Debra Ann Tallas, 61, of Forney, TX passed away on January 24, 2020 in Rowlett. Debra was born in Forney on January 16, 1959 to Ed and Linda Tallas of Kaufman. She was raised in Ola and went to Kaufman schools graduating in 1977. For 25 years, she worked for Texas Instruments in Administration and later worked for Lady Bug Scrubs retail store in Rockwall as a sales associate as well as being a Mary Kay Consultant. Deb thoroughly enjoyed her position at Lady Bug Scrubs and often referred to her coworkers as family. Deb also enjoyed spending time going to musicals as well as stamping on her off time. Her most precious time was spent with her family and friends, especially her granddaughter Ava who she loved to shop for and spoil. She was a beloved mother, sister, aunt, grandmother and friend. She is preceded in death by her parents. Those left to cherish her memory are daughter Christine Reynolds of San Antonio, TX, John Richard Reynolds and daughter Ava of Forney, TX, sister Carolyn and husband John, sons John Joseph and Michael Walker of Elmo, TX, brother Jim and daughter Kendell Tallas of Ola, TX, as well as numerous extended family and friends who will miss her dearly.

To order memorial trees or send flowers to the family in memory of Debra Ann Tallas, please visit our flower store.