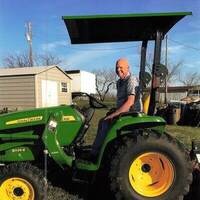 Danny D. Durst, 74, of Kaufman, TX went to be with the Lord on February 20, 2021.   Danny was born on March 6, 1946 to J.T. and Imogene Durst in Greenville, TX.    Danny married Glenda Sanders on December 21, 1963 and they have spent a wonderful 57 years together.  He joined the Army in 1966 and was honorably discharged in 1969.  Danny owned his own wood working machinery business for 10 years before working for Terrell State Hospital until he retired in 2019 due to illness. He loved to be outside and would stay on his tractor from sun up to sun down.  He would turn anything into a light,  there house always had the most lights on it and the front porch looked like a runway strip. Danny was a beloved husband, father, grandfather, great grandfather and brother.  His parents, brother Paul Durst and sister Vickie Humphrey preceded him in death.  Those left to cherish his memory include his wife Glenda of Kaufman, TX, son Keith Durst and wife Misty of Forney, TX, daughter Shannon Cummings and Jeff Franck of Kaufman, TX,  brother Dickie Durst and wife Brenda of Desoto, Tx, sister Jean Lunde and husband Harry of Wasila, Alaska, sister in law Anna Durst of Palestine, Tx, grandchildren: Brittany Crow,  Cody Durst, Trinity Durst, Tristen Durst and Brenden Cummings;  great grandchildren: Wyatt and Granger Crow as well as numerous extended family and friends who will miss him dearly.

To order memorial trees or send flowers to the family in memory of Danny D. Durst, please visit our flower store.