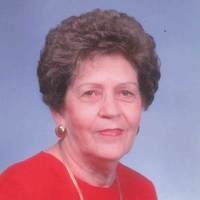 Colleen Reynolds Flint, 92, of Kaufman, TX passed away on February 22, 2020 in Forney. Colleen was born on August 12, 1927 to Wesley and Helen Reynolds in New York, TX. Colleen grew up in New York, TX and graduated from LaPoiner High School. She married James Flint in Eustace, TX on May 25, 1946 and they spent a loving 54 years together before he passed away on September 9, 2000. Colleen worked for Magnolia Petroleum in Dallas for a while before choosing to stay home and take care of her daughters. She enjoyed conversation with her family, friends, and anyone else, watching the Cowboys, Mavericks and Rangers, playing piano, bowling, playing basketball and volleyball at church and taking her girls to the skating rink. Colleen also had a squirrel she would feed and it would walk right up to her when she sat on her bench outside. She has been a member of the First Baptist Church in Kaufman for 60 years. She was a beloved wife, mother, grandmother and sister. Her parents, husband, brothers: John Reynolds, Jack Reynolds, Weldon Reynolds and Hugh Reynolds; and a baby sister preceded her in death. Those left to cherish her memory are: daughters: Cindy Woody and husband Gailand of Crandall, TX and Sandy Floyd and husband Bobby of Kaufman, TX; brother Kenneth Reynolds and wife Carol of New York, TX, grandchildren: Stephanie and husband John, Sally and husband Chris, Daniel and wife Christy and Cody; great grandchildren: Mckenzie, Mckayla, Kade, Kylie, Presley, Allie, Carter, Rhyatt, Reece and Radd; numerous extended family and friends who will miss her dearly.

To order memorial trees or send flowers to the family in memory of Colleen Reynolds Flint, please visit our flower store.