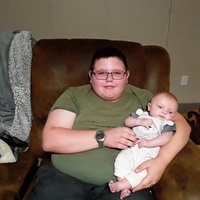 Cody Wade Blackburn, 13, of Kaufman, TX went to be with the Lord on August 27, 2020. Cody was born on July 30, 2007, to Michael and Wynette Blackburn in Terrell, TX. Cody was a bright young kid who has lived in Kaufman all his life. He attended Kaufman ISD schools growing up and made many friends. He loved to build and work. He built his own desk for this year's online classes he was taken and has helped his neighbors build a barn; he would help widows with all kinds of things. Cody would help out at the shelter with his Nana and run her tractor to help mow the yard. He also spent time riding four wheelers. He was a best friend to many and would brighten up your whole day. Cody was preceded in death by his grandfather Herbert Harmon. Those left to cherish his memory are his parents Michael and Wynette, siblings Monte and Stormy Blackburn, grandparents: Mary Harmon and Mary Twombly, great grandmother Iva Harmon, great grandfather Sam Jordan and Uncle Kidd, who will all miss him dearly.

To order memorial trees or send flowers to the family in memory of Cody Wade Blackburn, please visit our flower store.