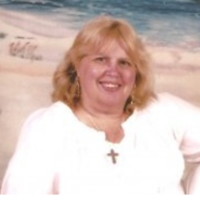 Charlotte Jean Taylor was born on October 21, 1957 in Dallas, TX to John and Jean Taylor. Charlotte entered into the Presence of her Heavenly Father on February 11, 2021 in Kaufman, TX.

Charlotte’s childhood was surrounded by a loving family, filled with excitement and antics. Stories of which were retold to the enjoyment of all who heard. Charlotte graduated class of 1976 from H. Grady Spruce High School in Dallas, TX. She continued her education receiving a Bachelor’s of Science for Radio, Television, & Film at The University of Texas at Austin. While she was at U.T. she attended several home football games with her cowbell in hand and cheering as loud as possible. Charlotte also had the privilege of working for the acclaimed television program Austin City Limits, once again, with stories that would make anyone crack a smile or roll on the floor with laughter.

It was at U.T. that Charlotte met the love of her life, Tom Sawyer. On June 27, 1981 Tom and Charlotte were wed in Holy Matrimony. They bought their first house together in 1983 in Kaufman, TX, and they have lived on their property ever since. Tom and Charlotte had two children who they raised in the fear and admonition of the Lord.

Charlotte had many interests. She loved her Dallas Cowboys and Texas Longhorns even though both gave her constant aggravation. She also hated baseball. She loved to travel and cherished her memories of traveling with her family. She enjoyed going to the theater and loved classic movies.

Charlotte’s first priority was her family, but the second was her ministry. She was an Ordained Minister through World Bible Way Fellowship for over 30 years. Charlotte and her family started attending First Assembly of God in Kaufman, TX in 1992 and fell in love with the church. She taught a Sunday School class for several years and also served as a Missionettes Leader, Women’s Ministry Director, Youth volunteer, Puppeteer, Missions Pastor, and whatever she could do to help. Charlotte led several Missions Trips to Mexico and had a passionate heart for Missions.

In 2013, Charlotte was diagnosed with Amyotrophic Lateral Sclerosis (A.L.S. or Lou Gehrig’s Disease). Her prognosis was dire, but as always, with her family by her side, Charlotte defied the odds and fought a brave and valiant fight. Charlotte’s family is eternally grateful to Maxim Healthcare Services and all the Nurses who have provided care during this challenging time.

Charlotte was preceded in death by her grandfather, Preston Cooksey, and father, John Taylor.

To order memorial trees or send flowers to the family in memory of Charlotte Jean Taylor, please visit our flower store.