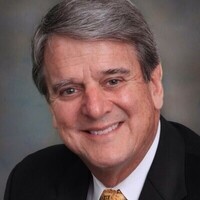 Carl Celso Stapp, loving brother, father, and husband, died at home in Forney, Texas on February 5, 2022. Carl was born on October 9, 1944, in Dallas, Texas to Celso Stapp and Emma Davis Stapp.  Soon after his birth, they moved to El Paso, Texas where he and his sisters grew up. He left home to attend high school at Texas Military Institute in San Antonio, Texas.  After graduating, he completed his undergraduate degree at Austin College in Sherman, Texas (Class of 1967).  During his academic tenure, he formed lifelong friends, which in later years resulted in many golf reunions all over the US.

In 1972 Carl moved his family to Kaufman where he resided for almost 50 years. During that time, he raised his daughters, Shannon, and Stephanie, built his career in manufacturing and operations at Aberdeen/ CHF Industries. He retired from CHF in 2002.

In 1991, Carl married his wife of 30 years, Joan Nye Stapp.  He enjoyed accompanying Joan on their many antiquing trips which often included golf.  During their marriage, Carl was blessed to have seven grandchildren come into his world.

Throughout his life, Carl believed strongly in the importance of service- to his community, his church and causes close to his heart.  In that spirit, he served on Kaufman’s Chamber of Commerce, School Board,  City Council and Economic Development Board. He was a 49-year member of Kaufman’s chapter of the Lion’s Club, where he held every position from President to Tail Twister and setup an annual donation program to the Foundation Fighting Blindness.  He dedicated 17 years of service to Texas Health Resources of Kaufman by serving on their board and numerous committees, as well as attending their annual Black-Tie Ball fundraiser.  In his retirement, he became involved with Lone Star CASA, where he helped to organize their annual fundraiser, the Lone Star CASA Clay Shoot, which is now in its 7th year.  This belief in service was reinforced through his faith and his active membership in First Presbyterian Church of Kaufman.

While flowers are welcome, the family requests that memorial donations be made to Lone Star CASA.org.

To order memorial trees or send flowers to the family in memory of Carl Celso Stapp, please visit our flower store.