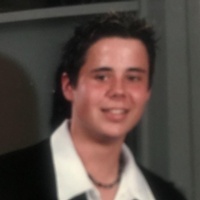 Brandon "Brando" Ray Patton, 34, of Kaufman, TX passed away on May 3, 2019 at home. Brandon was born on February 12, 1985 to Warren Ray Patton and Terri Lynn Patton in Greenville, TX. Brando was a motorcycle stunt rider and competed in teh BrandX Freestyle events. Born in Greenville, he was raised in the Kaufman area and attended Crandall Schools. Brandon was a beloved son, brother and uncle. Those who preceded him in death include: grandparents Danny and Dorothy Clark, great grandparents Ray and Fern Patton, uncle Danny Dale Clark and aunt Patsy Jean Watson. Those left to cherish his memory are his mother Terri Lynn Patton, his father Warren Ray Patton, grandparents Willie and Patsy Patton, brother Ray Patton, nieces Aspen and Ava Patton, aunt Rita Webster, aunt Teresa Clark Barns, uncle Dane Clark and numerous other family and friends who will all miss him dearly.

To order memorial trees or send flowers to the family in memory of Brandon Ray Patton, please visit our flower store.