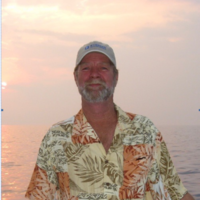 Billy Harold Campbell, age 67, passed away in the comfort of his daughter’s home in Terrell, Tx on May 14, 2020.  Billy was born in Mesa, Arizona, “the number one son” of Billy and Jean Campbell. He grew up in the town of Snyder, Texas.  As a young man, he was involved in the Boy Scouts of America.  He attended Snyder High School, graduating class of 1970, where he was a member of the FFA and played clarinet in the band.

After high school, he moved to the DFW area and worked several construction projects. He then went on to the mobile home business where he worked until retirement.  His retirement days were highlighted by spending time traveling with family and visiting his son and granddaughter in Okinawa.

Billy was a very patriotic man his entire life. He was a “true son of Texas”. He was known for his barbecue, dominoes, and horseshoes. He was a huge history buff and loved to travel. Every trip included historical markers, beaches, and battleships. Most of all he loved his family.

To order memorial trees or send flowers to the family in memory of Billy Harold Campbell, please visit our flower store.