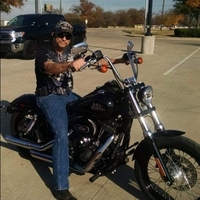 Albert Wade Ansel, 64, of Peeltown, TX passed away on Sunday, May 31 2020, in his home surrounded by his friends and family . He was born September 17, 1955 in Dallas TX to Clarence and Faye Ansel.  Albert grew up in Pleasant Grove, TX where he found his passion for car racing and motorcycles. He was raised loving the outdoors along with his brothers and friends.  It was there that he also found the love of his life Donna Long.  They were married and had 3 beautiful daughters Brandy, Monica and Deanda.  Albert joined the United States Navy.  In 1976 He was stationed in San Diego, CA; which is how some came to know him as Navy Al.  Albert was truly dedicated to his duty and very much loved being a sailor. It’s safe to say he had three loves in life his family, his Navy career and his Harley Davidson motorcycles.  After his retirement, he and his family then moved to Peeltown, TX.  After many years of hard work and determination Al fulfilled his dream of starting his own business. Along with his grandson Colton Ansel, also referred to as "Lil Al", he opened BravoZulu Waterjet.  He was living his dream on the road with his little buddy, enjoying every moment of it. Over the last few years Albert also found a new love, the love of his Lord and Savior Jesus Christ.  With the help and strength of his friends (or brothers and sisters) of the Styx New Life Church, Albert found the courage to fight, and in the final days, the solace to let Jesus guide him home.  Albert will be remembered as a determined, intelligent, and honorable man. Those who knew him will miss him dearly and cherish all of the memories that they have in their hearts.  His parents, mother-in-law Jean Long, siblings: Linda Gail, Richard Lewis and Donald Lee preceded him in death.  Albert leaves behind his loving wife Donna Ansel; children: Brandy Cox and husband Daniel of Scurry, TX, Monica Hofman and husband Robert of Peeltown TX. and Deanda Arceneaux and fiancée Lynn Langston of Beaumont, TX; grandchildren: Colton Ansel, Trenton Cox, Jaydon Arceneaux, Purity Hofman, Myla Hofman, Slade Cox,  Ryder Hofman and Avi Hofman; siblings:  Kenneth Ansel and wife Gail of Victoria, TX, Thomas Ansel of Kaufman, TX, Carolyn Mize and husband Lenard of Kaufman, TX and Sonje York of Plano, TX; numerous nieces, nephews, other extended family and friends who will miss him dearly.

To order memorial trees or send flowers to the family in memory of Albert Wade Ansel, please visit our flower store.