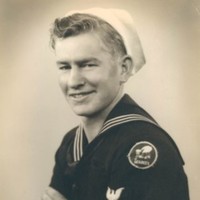 MELVIN RAY McMAHON Melvin Ray McMahon of Kaufman passed away at his home on May 20, 2014. Melvin was born in Gilmer, Texas on August 31, 1926 to William Monroe and Vedie Clara Squires McMahon. Melvin was raised in the Heath, Texas area and then joined the U. S. Navy in 1945 and served during WWI. After, the service Melvin moved to Kilgore, Texas where he married Mildred Louise Hester on October 15, 1946. He lived in Kilgore for two years later moving to Mesquite, Texas in 1955. Melvin later moved to Kaufman in 1990. He worked for Beatty Engineering in Dallas for over thirty years. Melvin was a member of Local Union 100 and a member of the First Assembly of God Church in Kaufman, Texas. Melvin is survived by his wife: Mildred of Kaufman, son: Dr. Stephen McMahon and his wife Sherry of Kaufman, daughters: Barbara Allen and her husband Don of Kaufman and Janet Shindoll and her husband Ron of Terrell, sister: Lavedier Walker of Royce City, grandchildren: David Hamby, Larry Hamby, Brandon McMahon, Zachary McMahon, Micah McMahon, Julie Earnest, Katherine Shindoll and Laura Decker, five great-grandchildren and one great-great-grandchild.
To order memorial trees or send flowers to the family in memory of Melvin Ray McMahon, please visit our flower store.