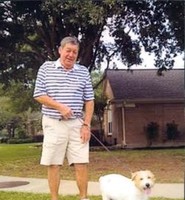 JERRY NEIL MILLER Jerry Neil Miller, 76, of Katy, Texas, passed away on June 2, 2014 peacefully at Methodist Hospital in Houston. Jerry suffered from a heart condition as well as lung complications. Jerry was born in Jiba, Texas, September 19, 1937. He is preceded in death by his mom, Gussie and his stepfather, Prince Walker. Jerry grew up in Kaufman, Texas along with his brother and friend Ricky Walker. Jerry was married to Margaret Ann Swindle on August 23, 1958; they were married for 55 years. Jerry is survived by his wife Margaret, his two children, Jeffrey Neil Miller of Tomball, Texas and Jill Miller Bell of Katy, Texas. Jerry had four grandchildren, Ramsey Miller, Reagan Miller, Hunter Bell and Bailey Bell. Jerry served in the 49th Armored Division in Fort Polk, Louisiana. After serving his country, Jerry worked for Texas Industries for over 20 years and spent 16 years working for Vulcan Materials. Jerry was very well known as an expert in his profession as well as a man who probably did not take a day of vacation in his life. He loved his job and his work ethic was beyond the normal employee. Jerry loved his home and working in his yard. Jerry also enjoyed playing golf, hunting and fishing. Jerry loved his buddy Jake and walked him every day until the past year. Burial will follow the funeral at Wilson Chapel. The family would also like to invite everyone for a celebration of Jerry's life at Maple's Hall from 1:00-4:00 for food and memories.
To order memorial trees or send flowers to the family in memory of Jerry Neil Miller, please visit our flower store.