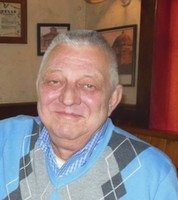 Paul Edward Bergstrom was born on September 10, 1941 to Oscar and Ethel Bergstrrom in Dallas, Texas. Paul passed away on July 2, 2014 at his home in Terrell, Texas. Paul married Carla Estelle Nash on March 8, 1963 in College Station, Texas. Paul was raised in Dallas and graduated from Woodrow Wilson High School. After high school Paul proceeded to Texas A&M University graduating with a degree in Electrical Engineering in 1963. He entered into the United States Air Force as a navigator on a C130 and served in the Vietnam War. After the service Paul went to work for Dallas Power and Light and retired from there in 1993 after 22 years of service. In 1997, he moved to Kaufman County. Paul had an enthusiasm for building model airplanes and classic Mustang cars. Paul is survived by his wife of 51 years Carla Estelle Bergstrom of Terrell, Texas. Sons; Brian Bergstrom and his wife Jodi of Murphy, Tx, Mark Bergstrom and his wife Amy of Corinth, Tx, Michael Bergstrom of Frisco, Tx. Daughter; Lisa Herterich and her husband Ernie of Longview, Tx. 10 Grandchildren.
To order memorial trees or send flowers to the family in memory of Paul Edward Bergstrom, please visit our flower store.