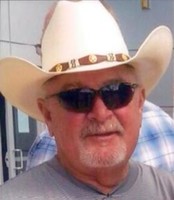 TRAVIS W. PITTS Travis Walter Pitts was born in Haskell, Texas on December 19, 1951 to Wallace Mack Pitts and Alice Marie Crow. Travis passed away in a Dallas, Texas hospital on October 31, 2014. He was raised in Forreston, Texas and lived in Italy, Texas for six years. Travis moved to Kaufman in 1994 where he lived the rest of his life. He was the owner-operator of EPCO Industrial Contractors in Mesquite, Texas for nine years. Travis was preceded in death by a daughter Misty McCoy on November 13, 2009. Travis is survived by his sons: Wesley Pitts of Kaufman, Clay Sigler of Waxahachie, Cody Pharris of Kaufman, Garret Pharris of Kaufman and Taylor Richardson of Kaufman, daughters: Samantha Padilla of Italy, Texas and Whitney Richardson of Kaufman, eleven grandchildren, brother: Mack Pitts of Forreston, sisters: Patsy Cosby of Mertens and Sandy Corbet of Forreston and many other relatives and friends.
To order memorial trees or send flowers to the family in memory of Travis Walter Pitts, please visit our flower store.