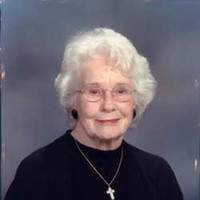 KATHRYN ELIZASBETH CURRY Kathryn Elizabeth Curry was born in Utica, New York on July 16, 1920 to Bert and Helen Stevens Conklin. Kathryn passed away in a Kaufman, Texas care center on December 1, 2014. Kathryn was raised in New York and then moved to San Bernardino, California. She later moved to Texas in 1949 and then to Washington State in 1967. In 2010 Kathryn moved back to Kaufman. She was a member of the Lutheran Church. She was preceded in death by a son Dennis Patterson in March of 2010. Kathryn is survived by her sons: Carl Patterson of Norfolk, Virginia, John Patterson of Kaufman and Anthony Patterson of Forney, daughters: Judy Conner of Kaufman and Angela Patterson of Terrell, numerous grandchildren and great-grandchildren. Graveside services were held Wednesday, December 3, 2014 at 2:00 P.M. at Kaufman Cemetery.
To order memorial trees or send flowers to the family in memory of Kathryn Elizabeth Curry, please visit our flower store.