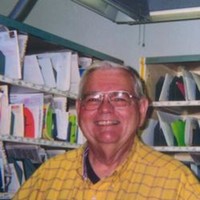 TALMAGE SPRINGER RICHMAN Talmage Springer Richman of Scurry, Texas was born in Terrell, Texas on January 2, 1944 to G. T. Richman and Zelma Ruth Springer. Talmage passed away in a Dallas, Texas hospital on December 1, 2014. Talmage was raised in Scurry and lived all his life in Scurry. He and his father had their own welding in shop in Scurry before Talmage went to work for the United State Postal Service as a rural mail carrier. Talmage worked thirty-eight years for the postal service before retiring in 2005. He was a member of the Mount Olive Missionary Baptist Church in Scurry and the Kaufman Masonic Lodge in Scurry. He loved to read and build different things. On, April 3, 1982 Talmage married Mary Jane Wilmoth in Dallas, Texas. Talmage is survived by his wife: Mary Jane of Scurry, son: Rodney Richman and his wife Lexie of Scurry, grandchildren: Aidan Richman and Addison Richman and many other relatives and friends.
To order memorial trees or send flowers to the family in memory of Talmage Springer Richman, please visit our flower store.