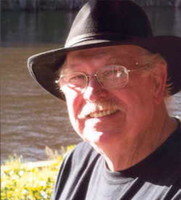 RICHARD THOMPSON REITES Richard Thompson "Dick" Reites, age 76, of Crandall, TX, passed away on February 6, 2015. He was born on September 16, 1938 in New Orleans, LA to Claude T. Reites and Marie McEntee Reites. He was raised in Louisiana and California before moving to Texas in 1968 to raise his own family. Richard was a machinist by trade and retired from Microspace in Dallas, TX in 2007. He loved tinkering with the muscle cars he owned, playing dominoes, pool and cards, and spending time with his enormous family. He was a patient man who led by example, loved the details of his work or a good cajun recipe, and enjoyed watching Saints and Cowboys football. Richard was raised Catholic and was a member of The Rock Church of Dallas, TX. Richard was preceded in death by his parents, brothers, Claude J. Reites and Jack Reites; daughters Jenine E. Loonan and Lindee C. Geros. Richard is survived by his wife of 37 years, Vickie Reites of Crandall, TX; children, Richard J. Reites of Huntsville, TX, James M. Kadleck of Oakland, CA, Lori Baker of Lewisville, TX, Lisa Eastland of Rowlett, TX, and Debbie Baker of Kemp, TX; siblings, Barbara Guidry of Metarie, LA, Marie Hagstette of Metarie, LA, Patty Dieudonne of Kenner, LA, and Karen Lamo of Chickamauga, GA. He is also survived by 15 grandchildren, 10 great-grandchildren, many loving in-laws, nieces and nephews and friends.
To order memorial trees or send flowers to the family in memory of Richard Thompson Reites, please visit our flower store.