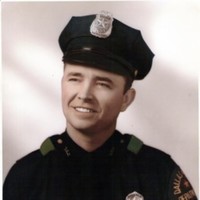 CLOVIS JAMES WILLIAMS JR. Clovis James Williams Jr. was born in Glendale, Arizona on November 13, 1931 to Clovis Albert and Elsie Vandeline Jones Williams. Jim passed away in a Kaufman, Texas hospital on March 26, 2015. Jim was raised in New Mexico and moved with his military family all over the country. Jim joined the U. S. Air Force in 1950 and served in the Korean War. He moved to Dallas, Texas in 1963 and later moved to Terrell, Texas and then to Kaufman, Texas in 1994. Jim became a Dallas Police Officer in 1963 and retired after twenty-one years in 1984. Jim also retired from DART in 1996 and the Dallas County Sheriff's office in 2005, Jim was a member of the VFW, NRA and the First Baptist Church of Kaufman. On May 1, 1993 Jim married Alma Gay Mundie at the First Baptist Church of Terrell. He is survived by his wife: Alma of Kaufman, son: Van Williams and his wife Ana of Plano, daughters: Sherry Critz of Sweetwater, Rhonda Frantz and her husband Leland of Royce City, Gaylene Baker and her husband David of Kaufman and Leisa High and her husband Kirk, sisters: Lois Acklin of Hamlin, Pauline Pitcox of Abilene and Michelene Williams of Albuquerque, nine grandchildren, twelve great-grandchildren and many other relatives and friends.
To order memorial trees or send flowers to the family in memory of Clovis James Williams, please visit our flower store.