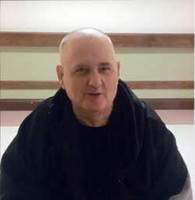 Georgie Ray Denham was born on April 4, 1952 in Dallas, Texas to Jonah Garrett Denham Jr. and Vivian Marie (Cartwright) Denham. Georgie went to his Lord on May 21, 2015 in Kaufman, Texas. Georgie was loved by all his friends and family including Nieces, Nephews, Great-Nieces, and Great-Nephews. Georgie had an admiration for the television series "Swamp People". Georgie is survived by his Sisters: Janet Gentle and husband David of Kaufman, Texas; Janey Tanksley and husband Gary of Royse City, Texas. Many Nieces, Nephews, Great-Nieces and Great-Nephews. Georgie was preceded in death by his Father: Jonah Garrett Denham Jr., Mother: Vivian Marie Denham, Sister: Francis Ann Griffin of Kaufman, Brother: Garrett Gene Denham of Lake Worth, Texas.
To order memorial trees or send flowers to the family in memory of Georgie Ray Denham, please visit our flower store.